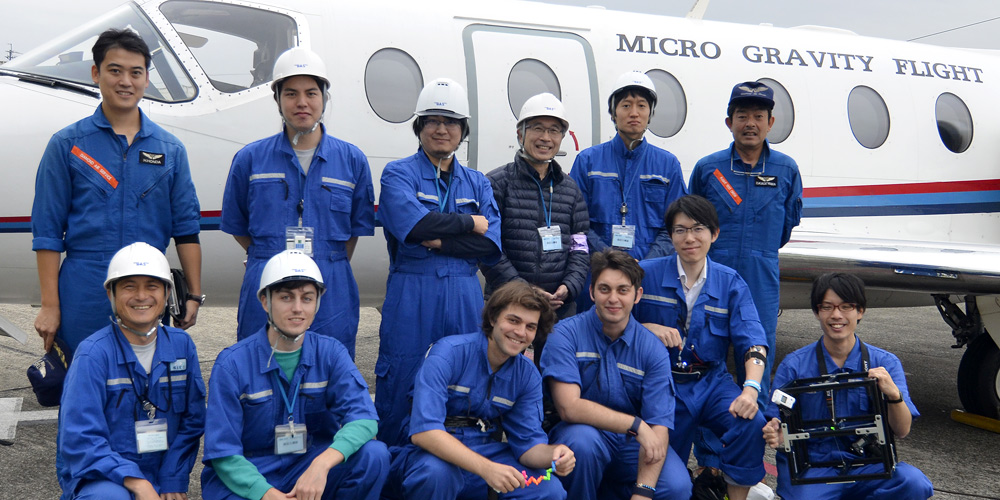 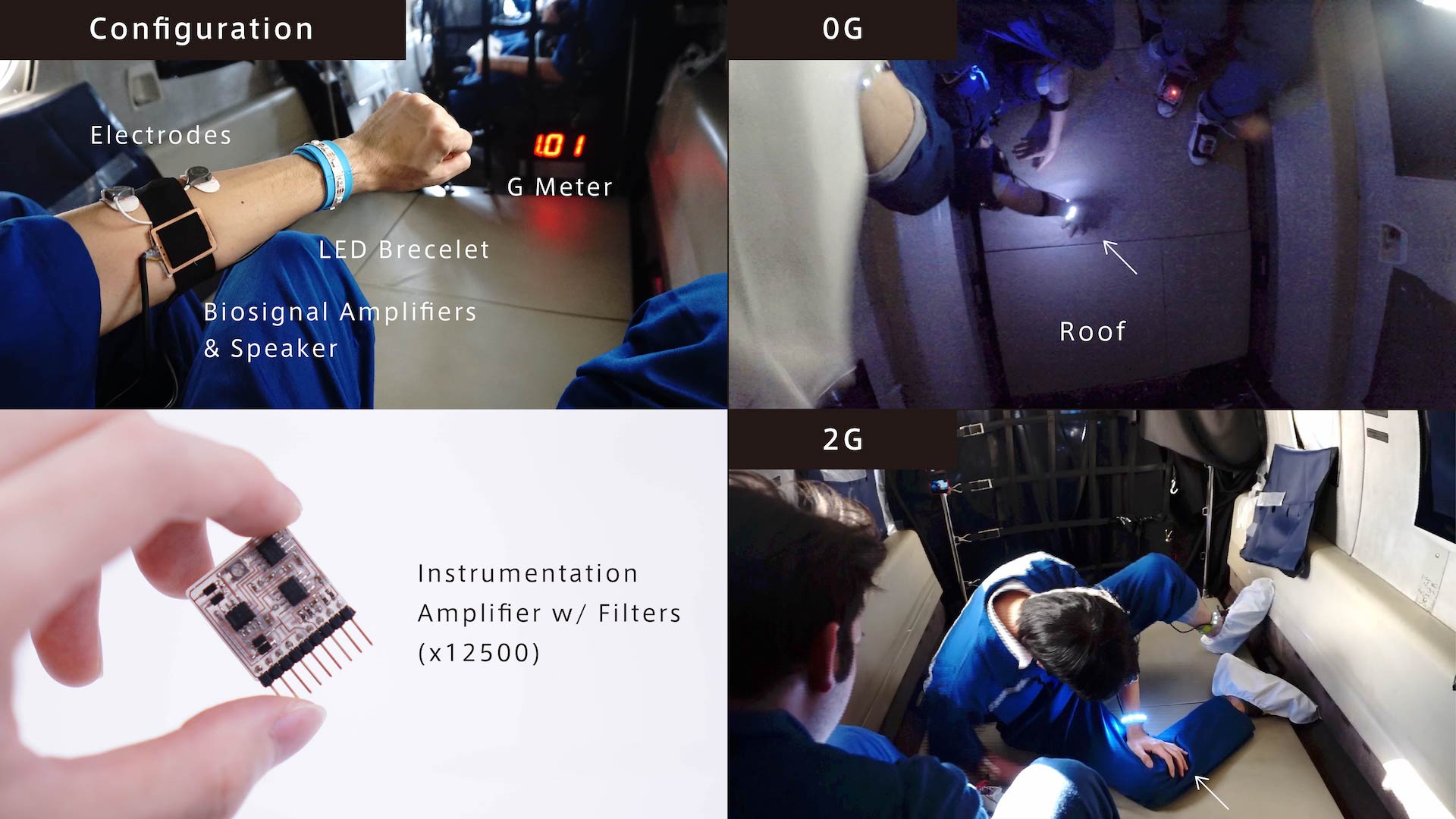 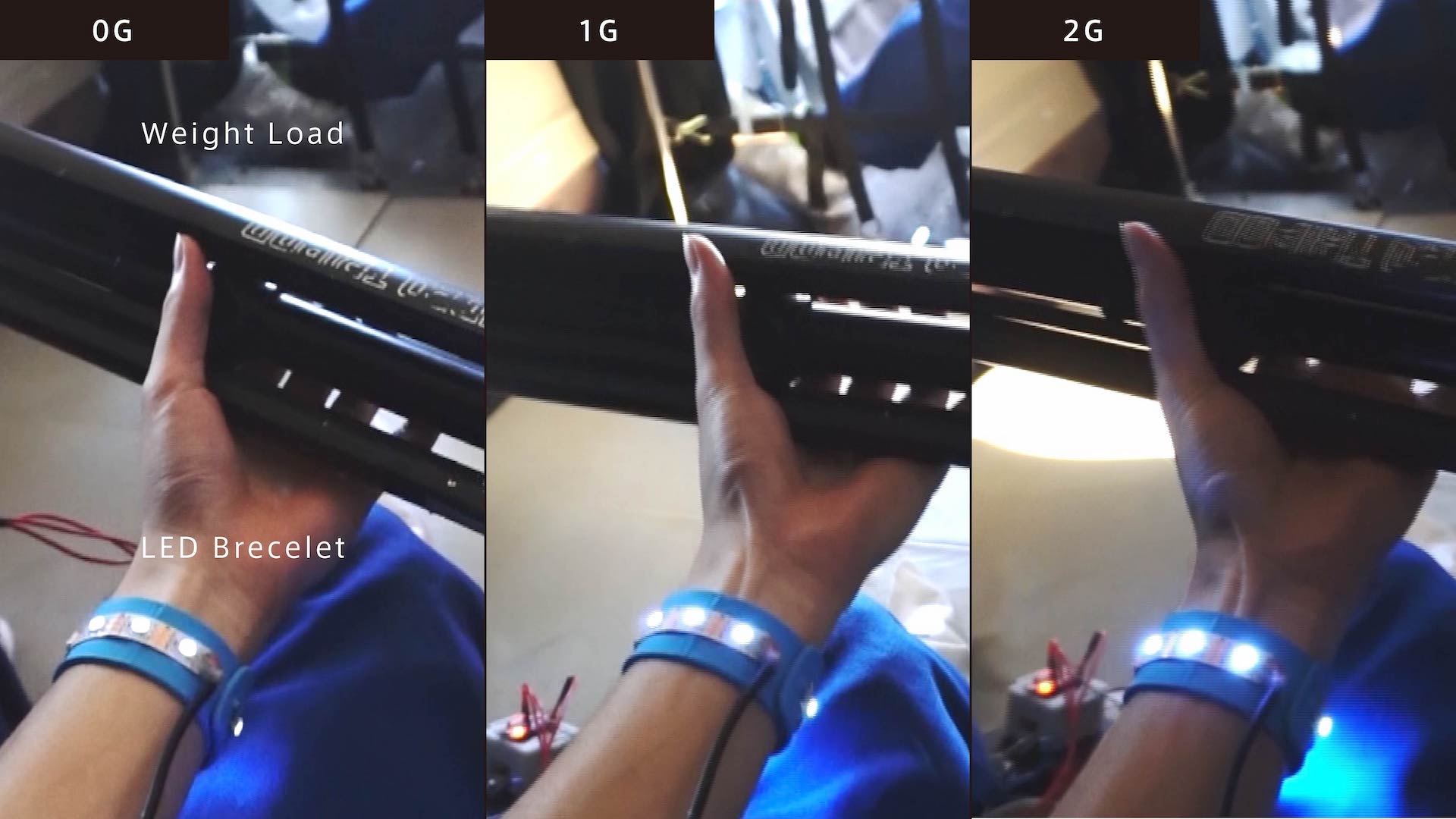 This project aims to expose and reproduce human’s kinesthetic experience, such as muscle activity which are usually hard to be observed in visual contact, under a micro-gravity environment generated by a parabolic flight. This allows to expose “kinesthetic confusion” of a floating user in the plane which is caused by the inability to recognize upside-down and the ground plane. In addition to such aspect, the device is also designed to be used for assisting astronauts in understanding appropriate muscle activity during their physical training. During the flight, we conducted two experiments which are performance evaluation and visualization of kinesthesia during micro-gravity.

bioSuits: Expose Your Kinesthetic Experience
To allow one person to experience zero gravity situation, I developed a wearable device, called bioSuits, capable of measuring biosignals of muscles, called electro-myo-gram (EMG) into light-emission and sounds on the skin. It also equips a circuit that performs electrical muscle stimulation (EMS), which is capable of controlling muscle tension by applying electric pulses on the skin. By combining both the EMG sensor and the muscle stimulator, it is possible to record and reproduce one’s muscle activity while the body is floating due to the micro-gravity.

Exploratory Sessions
As a performance evaluation, we observed the light-emitting pattern under three different conditions of gravity, 0g, 1g, and 2g. While each gravity is produced by the parabolic flight, the wearer sat on a chair with a safety belt, then held a weight load in their hand and try to keep holding it. As a result, the device’s light was emitted stronger during 2g period, and disappeared during 0g period. This verified that the developed device could filter out radio noises and other electromagnetic interference from the plane, then measured and present muscle activity correctly.

A user study was also conducted for verifying the feasibility as a tool to observe kinesthetic experience while the body is floating. The wearer sat on a free space in the plane without any restrain, then floated while 0g period or tried to keep his posture while 1g and 2g period. The recorded video showed that when the user lost his recognition on his posture and upside down, the lights emitted very strongly and irregularity since he tried to find the ground and some handle to hold. The results suggested that our proposed device would provide a new style of augmented embodied media in a micro-gravity environment.

“Life in the Space Age: Experiments of Art and Technology in Zero-G”, ARS ELECTRONICA, 2017 (web)